But there’s also flexibility in terms of the way that you work and whether you prefer to work as a contractor or a permanent resource. This choice impacts a number of things, from your take-home pay to your job security and career options, meaning it can be a difficult choice to make. Below, I have explained the differences between the pay scales.

For many people, the higher earning potential of contracting is one of its biggest drawcards. I often hear anecdotal evidence of contractors earning up to 50% more than their permanent counterparts. But there are a number of factors that influence this, which are worth exploring.

Data from the latest PeopleBank employment survey shows that, for example, an Application Project Manager in Melbourne could earn a permanent salary of $95–150,000 per annum (depending on industry and experience) versus $700–1,000 a day contracting.

So how do these compare as annual salaries? Let’s start by looking at the lower end of the range. Remember, that as a contractor you only earn income for the days that you work so if you’re sick or on holidays, you don’t get paid. Also, you might have to pay your own superannuation.

So, let’s do the maths on how many days a contractor would work if employed for a full 12 months. 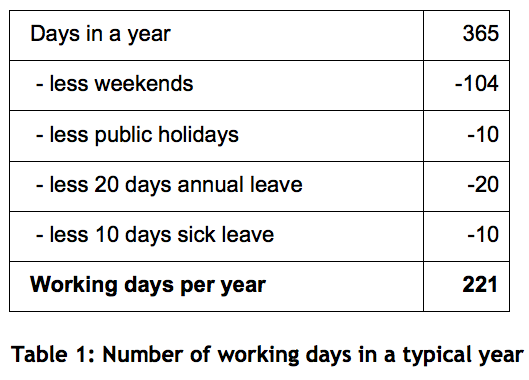 Based on this conservative estimate of 221 working days a year, we can now calculate the equivalent salary for a permanent versus contract employee.

Before you get stuck into the numbers, it’s important to note that the table below is a general example only. The numbers will change depending on the situation.

For example, you might be able to bypass working with an agency, so instead of outlaying that expense, keep some of those fees yourself. Or you may have different superannuation arrangements. Nevertheless, the below should serve as a good starting point and guide to decision making.

The above excludes any other benefits that might be included in a permanent employment contract, such as bonuses, long service leave entitlements or redundancy pay outs.

The contracting versus permanent series looks at the various factors that may encourage a project manager into a permanent or contract role according to: