The way PMI deals with risk in the PMBOK® Guide is simplistic. Calculating the effect of one risk using the suggested probability x severity calculation provides one value. For example, if there is an 20% probability an estimate is undervalued by $50,000, the Expected Monetary Value (EMV) for this event will be:

It is simple, but not a lot of use in the real world.

The first problem is the underestimated value is not known and would be better represented by a range statement but as the values in the range alter, so does the probability of and value occurring. Thinking of your car for a moment:

The next issue is correlation. Returning to the underestimate, was the underestimate a one-off factor (caused by a single unrelated external supplier) or is it a systemic estimating error affecting a number of related estimates (possibly caused by changes in the exchange rate). This needs modelling to determine the overall effect.

Then we come to the purpose of this article: do risks add together or discount each other? It depends on the situation.

Situation 1 looks at the probability of starting on time.

Consider three schedule activities each of 10 days duration, all of which need to be complete before their outputs can be integrated. 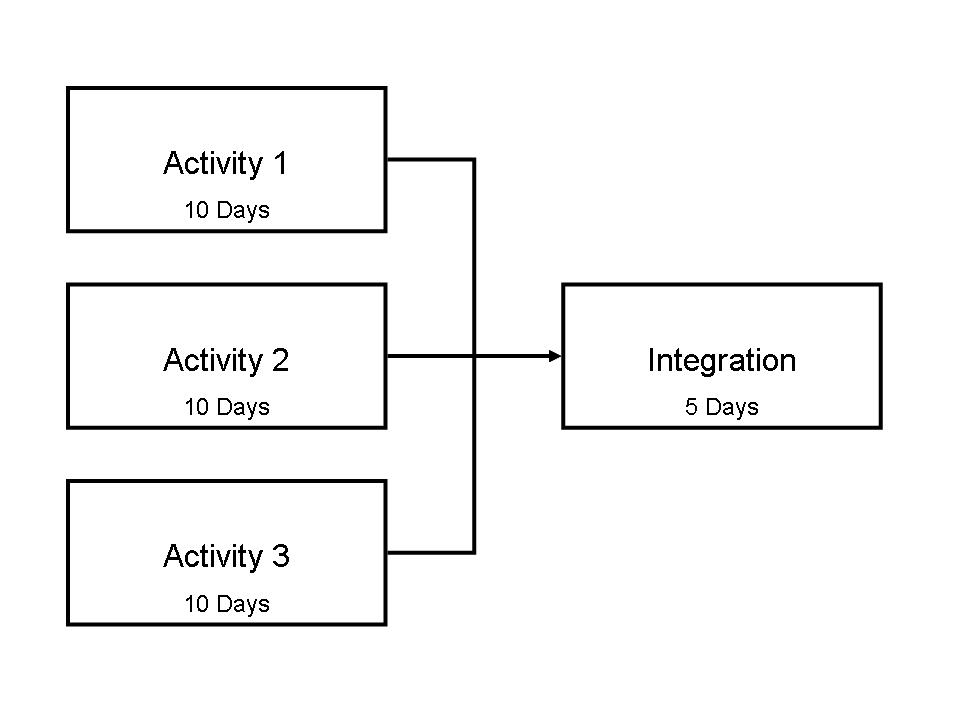 The overall chance of starting the ‘Integration’ activity on schedule needs an understanding of how these three activities affect its start. Based on the percentages above:

Take the number of ‘not late’ outcomes from the possible range of outcomes:

For a more complete explanation, see What’s the probability?

Situation 2 looks at the probability of finishing on or under budget.

In this scenario, money saved on one part of the project can be used to offset overspending on another. Assume you have 10 teams working on your project and they all estimate completing their section of the work for between $8,000 and $12,000; with the expected average of $10,000 per team. As the project manager, you can aggregate these estimates to arrive at a project budget of $100,000.

However, your team leaders are unlikely to submit an estimate which only has a 50% chance of being achieved—let’s assume they use the 90% probability benchmark common in oil and gas projects.

To achieve a 90% probability of the estimate being achieved, each of the individual team estimates will need to be increased to around $11,300 (assuming a normal distribution), which pushes the overall project budget up to $113,000 if you simply add up the risk adjusted estimates.

If you accept this approach, how much safety does this give the project manager? The answer is a surprising 99.998% probability of not exceeding the overall project budget!

The effect of combining uncertainties into a ‘portfolio’ is to reduce the overall level of uncertainty in the portfolio; basically wins on the ‘swings’ can be used to offset losses on the ‘roundabouts’ generating an increase in the overall probability of achieving any given target for the portfolio.

So if your project needs to achieve a 90% certainty overall and there are 10 separate teams, the correct budget is around $104,000, not the $113,000 calculated by summing each of the teams ‘90% estimates’ or the $113,000 required if the project is a single holistic entity. For more on this see Averaging the Power of Portfolios.

Confused or worried? I hope this has made you think about getting serious help when you start looking beyond developing a simple risk register. The difference between an individual project’s risks, the overall risk of a project and the risks associated with a portfolio of projects are complicated.