You can make all the jokes you want about delayed flights, but you should feel a little sympathy for Qantas’ Airbus A380 program, a jumbo undertaking with more than its fair share of false starts. Famously late when Airbus couldn’t deliver vehicles to the original schedule, the three times delayed A380s threatened to become a resource nightmare.

“The delivery date was such a key milestone that every time it changed, it was almost like starting from scratch,” says Vince Paolella, group general manager for New Aircraft Programs at Qantas. Delays cost them almost two years in delivering the new aircraft into service as each announcement significantly changed key project parameters.

“We basically had to revisit every aspect of the project and recalculate what it meant. We had to look at cost, we had to look at all our project milestones, resources and make sure everything was still lined up. Certainly after the first couple it was quite demotivating for the team, so it was also about keeping people focused and excited about the project.”

For Paolella, having the right team with the right mentality was a key factor in the undertaking. Every time the project was delayed, key people had to be redeployed in the organisation to ensure Qantas didn’t waste talent, “but we had to make sure we could get them back”. Add the fact it was a long project and Paolella says they had a staff turnover challenge on their hands, quite separate from the scheduling.

“Managing that on an ongoing basis was always a difficult exercise and it’s something that you don’t always fully plan for,” he notes. One of their lessons learnt was to devise a succession process for each project in the program based around what they would need to do if key people moved on. 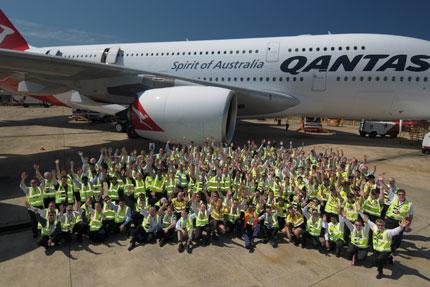 Funnily enough, at each end of the program Qantas faced two opposite obstacles: in the early days the economy was booming and it was difficult to find talent; after the global financial crisis, there was a recruitment freeze. Thus, the organisation implemented a critical resource escalation process “so that if someone in a critical role was required we could get the CEO engaged and fast-track the replacement process,” Paolella relays.

The experience has also taught them about the value of project management maturity, he says, noting that technical expertise was not enough. “That might be okay for a while, especially during the development phase where you need quite a bit of subject matter expertise, but then as you move into the implementation side, you need the project management skills. Sometimes people who are good in the earlier phases struggle to make the transition.”

In the future, “people should ideally be assessed against a recognised framework for project management capability,” he says.

Adeline Teoh
Adeline Teoh is the editor and publisher of ProjectManager.com.au. She has more than a decade of publishing experience in the fields of business and education, and has specialised in writing about project management since 2007.
Read more
News
Whitepapers
Submit a whitepaper
Pages