“Progress isn’t made by early risers. It’s made by lazy men trying to find easier ways to do something.”—Robert Heinlein

The subject of this article is the keys to being a ‘lazy’ project manager. By this we do not mean that project managers should be lazy and leave everyone else to do the work. Obviously, that would be ill-advised and would result in an extremely short career in project management.

What it is about is adopting a focused approach to project management, to exercise effort where it really matters rather than rushing around like busy bees involving ourselves in unimportant, non-critical activities that others can better address, or that, in some cases, do not need to be addressed at all.

The science behind laziness

The Pareto principle (also known as the 80/20 rule) states that for many phenomena 80% of consequences stem from 20% of the causes. The principle was first suggested by management thinker Joseph M Juran and was named after the Italian economist Vilfredo Pareto, who observed that 80% of property in Italy was owned by 20% of the Italian population.

The assumption is that most of the results in any situation are determined by a small number of causes. For a project manager, the value of the Pareto Principle is that it reminds you to focus on the 20% that matters.

It’s not sufficient to just be lazy; you have to be lazy in a very smart way. Productive laziness requires a powerful and magical combination of laziness and intelligence.

Here’s an example from the 19th century for you to consider: Helmuth Karl Bernhard Graf von Moltke (1800–1891) was chief of staff of the Prussian Army for 30 years. He is widely regarded as one of the great strategists of the latter half of the 17th century, and was the creator of an innovative method of directing armies in the field. Moltke had a particular approach to categorising his officer corps, something which lives on to this day within many armed forces, and which can be applied to all forms of leadership. 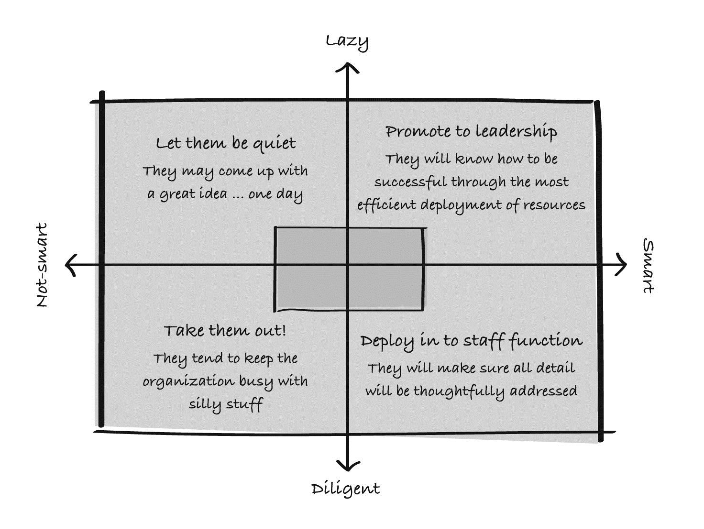 General von Moltke divided his officer corps into these four distinct types, depending on their mental and physical characteristics. Let’s look at them:

Type ‘A’ officers: Mentally dull and physically lazy people who were given simple, repetitive, and unchallenging tasks to perform. If you left them alone, they might come up with a good idea one day. If not, at least they wouldn’t cause you any problems.

Type ‘B’ officers: Mentally bright and physically energetic these officer were thought to be obsessed with micromanagement and, as a result, would be poor leaders. If they remained this way, promotion was possible over a period of time but not to the status of commanding officer of the German General Staff. These officers were best at making sure that orders were carried out and thoughtfully addressing all of the details.

Type ‘C’ officers: Mentally dull but physically energetic men who were considered to be somewhat dangerous. To von Moltke, they were officers who would require constant supervision, which was an unacceptable overhead and a distraction. Because they could potentially create problems faster than could be managed, these officers were considered to be too much trouble and were dismissed. No career for them!

Type ‘D’ officers: Mentally bright and yet physically lazy officers who von Moltke felt could and should take the highest levels of command. This type of officer was smart enough to see what needed to be done but was motivated by inherent laziness to find the easiest, simplest way to achieve what was required.

Put in a more positive way, they would know how to be successful through the most efficient deployment of effort. So, if we extend this theory, the hypothesis is that smart, lazy people have an edge over others and are most suited to leadership roles.

The ‘lazy project manager’ concept is all about applying these principles to the delivery and management of projects. It is assumed that you are not stupid so you are already on the right hand side of the diagram: what you now need to do is hone your lazy skills in order to rise to the top right hand side of the diagram. Do this and not only will your projects be more successful, you will also be seen as successful and an appropriate choice for future leadership roles.

“Whenever there is a hard job to be done I assign it to a lazy man; he is sure to find an easy way of doing it.”—Walter Chrysler

So, how to apply the theory to become really lazy (and really productive)? Let’s discuss how you might view a project. The Lazy Project Manager’s Theory of Projects, from a productive laziness aspect, is: ‘All projects are thick at one end, much, much thinner in the middle and then thick again at the far end.’

Working by the productive lazy rule, a smart project manager should apply time and effort at the critical stages of a project, that is at the start and the finish, and less time in the less critical, intermediate stage. At this stage,there are other team members who should be doing most of the hard work and you probably deserve a bit of a rest anyway.

The Lazy Project Manager’s Second Theory of Projects, again from a Productive Laziness aspect, states: ‘If you want to get a project from ‘start’ to ‘finish’ then you hitch a ride as much as you can—you don’t carry it!’

And the point this time is that as a smart project manager,you should be directing the project and not trying to carry that heavy load on your back all the way to the delivery gate. Do the things that will contribute to the ‘80%’ and avoid doing the things that won’t.

So what is it that a ‘lazy’ project manager should focus on during this initial ‘thick’ front end to their projects? By front end, we are referring to the initiation of the project. Well, the back end of initiation anyway. There is a project, you are the project manager, and the project is kicking off. Firstly, get ahead and then stay ahead of the ‘game’.

Plan a strategy for managing the two critical ‘players’ in the project: the project sponsor, who should be known at this point, and the person (or people) responsible for project creep, who could be anyone or everyone, including, if you are really unlucky, the project sponsor or, if you want to shoot yourself in the foot, you.

The project on auto-pilot

Now that we are now in the ‘much, much thinner in the middle’ part, what should the smart but lazy person be concentrating on? The lazy project manager now oversees the project work with as light a touch as possible. The planning was done at the ‘thick’ front-end of the project; at this point, it is all about execution and control.

A number of aspects work well in the world of productive laziness: firstly, ensuring that the project is conducted in a fun and enjoyable manner, and secondly, being prepared to get involved in a controlled and productive manner when problems occur.

Finally we arrive at the ‘thick again at the far end’ part. Now is not the time to declare the project a success and rush off for a stiff drink at the bar, welcome though that may be. No, now is the time that you can apply a small and final amount of effort but gain enormous amounts of knowledge so that future projects are likely to be even more successful, potentially with even less effort. And by less effort, we know that means so much more time in the ‘comfy chair’ being lazy but in a productive way.

9 tips for success the lazy way

Projects are difficult; we are not suggesting that they aren’t.