The gap between good and great can seem small but is often the most difficult to bridge. To what lengths should project managers go to achieve greatness in themselves and in their team?

Whiplash is an indie film that stepped into the spotlight when nominated for a 2015 Academy Award for Best Picture. It’s a tight narrative that follows the fortunes of an ambitious young jazz drummer trying to make it big in a school of talented musicians. The most formidable band leader (played by JK Simmons, who won the Oscar for Best Supporting Actor) heads the most prestigious band in the school and when the two meet, the interplay of ambition and force gives the rest of the movie its intensity.

The results are ambiguous. It’s not a spoiler to say the drummer shows his teacher—some say abuser—what he’s made of, but the real question is what he loses by seeking approval from someone whose standards are impossibly high.

I thought of Whiplash when reading Lynda Bourne’s piece ‘Good to great project leadership‘, which discusses the concept of Level 5 Leadership, a combination of “personal humility plus professional will”. It’s a very different look at what constitutes ‘pushing’.

We all want the people we work with to perform at an optimum. Part of this requires discouraging laziness and complacency but part of it is also about the nature of the leadership.

Simmons’ brutal portrayal leaves no doubt that the band leader in Whiplash expects those who perform in his group to regard his standard as the only standard worthy of their attention. It therefore goes beyond winning band competitions, which they do, and becomes ultimately about how he controls them, forcing them to outsource their feelings of self-worth to him. The problem is, that challenge is insatiable: it leads to unnecessary pressure and it’s unsustainable.

A better example might be Tina Fey in Mean Girls, who recognises unmet potential but stops short of tipping her students over the edge. 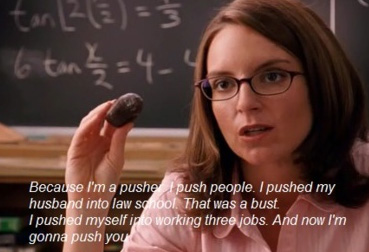 How do you balance ambition for greatness with true leadership? Is pushing ever the answer?

Adeline Teoh ed.
Adeline Teoh is the editor of ProjectManager.com.au. She has more than a decade of publishing experience in the fields of business and education, and has specialised in writing about project management since 2007.
Read more
News
Whitepapers
Submit a whitepaper
Pages