Within the industry there is a common understanding that an issue is a realised risk. That is, it is an event that was previously a risk to a project, whether identified or not, that negatively impacts on the successful delivery of the project.

While this is a generally accepted view, what is only now being understood is that an issue may be a realised risk whose impact is yet to be felt by the project and for which there is still time to address before the issue begins to impact the project. That is, an issue may be not only an event that is (current tense) impacting on a project, but may also be an event that will (future tense) impact on a project. Put simply, an issue is a risk with a 100% probability/likelihood of occurring.

Firstly, let’s not forget that an issue is a realised risk. Accordingly, an issue should have the same consequence (or impact) rating as the risk from which it was realised. That is, a risk that had a consequence rating of severe, once realised should become an issue with an impact rating of severe.

This paper proposes the use of an issue matrix, not dissimilar to the traditional risk matrix, to provide an overall issue rating that takes into account the temporal nature of risks. This matrix (below), retains the consequence or impact ratings we are familiar with from our risk matrices. However, instead of likelihood, the rows now relate to ranges of time in which the issue needs to be resolved before the impact actually negatively affects the success of the project.

As a default position, one could use the following definitions for the different temporal ranges: 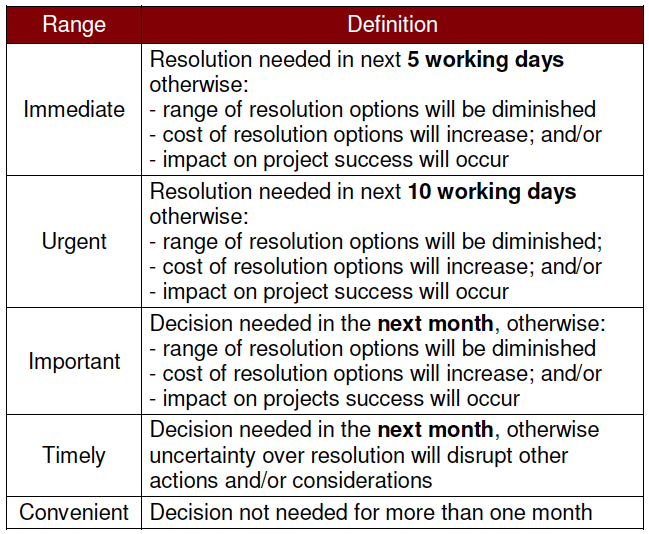 Furthermore, if an issue is left unresolved it would automatically advance up the rows, from convenient to immediate, as the date on which resolution is required approaches. This ensures that issues that were initially assessed as having a low ranking due to their lack of proximity to the current date are not forgotten.

In conclusion, this outlines a means by which the temporal aspects of issues can be managed so that a balanced approach/prioritisation of issues can occur and that resources are efficiently allocated to their resolution.