The greatest challenge facing project management in the 21st century is managing the shift from the ‘command and control’ paradigm based in the theories of scientific management developed in the early 20th century to a recognition of the inherent uncertainty and complexity involved in managing every project, in particular projects focused on the outputs of knowledge workers such as ICT and business change projects.

Project control systems (schedules, cost plans, etc.) don’t control anything and to a large extent, neither do project managers. People control their actions, and the environment dictates many ‘uncontrollable’ variables. Apart from providing guidance to the project team, project plans only provide a tool for estimating the likely levels of uncertainty in each element of the plan and then measuring the actual degree of variance as it occurs.

This traditional project management paradigm (philosophies and assumptions) has some validity when the goal the project has been created to achieve remains stable and the work required is largely straightforward and obvious, for example, the construction of a well-designed traditional building.

This ‘knowability’ and ‘understandability’ of both the project work and its intended deliverable is implicit in the relative success of traditional project management in its base industries such as construction and engineering. The value of the paradigm becomes less certain when the ultimate project goals are to be discovered, or change during the course of the work: for example, delivering a cultural change program, or when the nature of the work changes from essentially manual tasks to knowledge work.

Project management writings of the last few years are starting to suggest that people skills and leadership are seen as important attributes of a successful project manager. Effective stakeholder management is definitely seen as a major item in delivering project success*. Complexity theory helps us to understand the social behaviours of teams and the networks of people involved in and around a project. The idea of complexity applies equally to small inhouse projects as to large complicated programs. In this regard, ‘complexity’ is not a synonym for ‘complicated’ or ‘large’.

Applying complexity theory, the nature of a project is described from the perspective of the knowledge workers or ‘actors’ engaged in the creation, execution, delivery and closure of the project. Consequently, the purpose and use of project management artefacts such as schedules and earned value charts changes from control documents to communication tools to influence these ‘actors’ (stakeholders).

Projects as a social experience

Viewing a project as a temporary knowledge organisation moves the focus of project management from the observation of the output of the project (its deliverable) to the processes needed to transform inputs received by the project team into the project deliverable/s. This transformation is achieved by the gathering, melding, processing, creating and using of knowledge.

This represents a shift from viewing projects as tools applied to solving problems, where people are outside the project, to the creation of a sense-making community of practice by the people involved in the project. This requirement for project team members to also be knowledge workers leads to additional expectations of the leadership qualities of the project manager**. 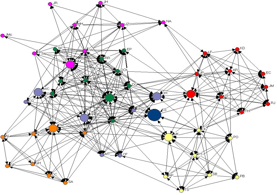 Each network contains a level of ‘social capital’: the sum of the actual and potential resources embedded within, available through, and/or derived from the network of relationships that connect its members.