A project has considered to have ‘failed’ if:

Construction disputes are also on the increase, with the direct cost of resolving disputes in Australia high and rising. Recent estimates suggest disputes cost the industry between $560 and $840 million per year. These are worrying trends for the industry, but what’s at their root cause?

There are a number of contributing factors, not least the global economic slowdown and more confrontational tendering practices. We believe, however, that there is something deeper that the industry has ignored for too long: the impact of human relationships on project success.

Why do projects fail?

It almost sounds too simple, but it is widely recognised that projects generally fail because of human behaviours, not technical issues:

“By and large projects are not driven to failure by a lack of technical knowledge but by project behaviours that may be reasonably anticipated. Project failure to meet objectives can be prevented by elimination or mitigation of the root causes. These causes are non-technical in nature.” (Hayden, 2004).

However, unlike other industries that have realised the contribution of human factors in relation to team performance, safety and success, the construction industry still has its head firmly in the sand.

Take the aviation industry, for example. Following a spate of fatal accidents in the 1980s and 1990s, research showed that the majority of accidents were ultimately caused by a lack of communication or negative team dynamics in the cockpit. In response, the industry embraced a concept called Crew Resource Management (CRM) and has subsequently undergone a major transformation.

Crew Resource Management emerged from a workshop at NASA in 1979, when it found that the primary cause of most aviation accidents was human error. CRM is not concerned with the technical knowledge and skills required to operate equipment, but rather with the cognitive and interpersonal skills needed to manage resources within an organised system. CRM aims to foster a culture where the freedom to respectfully question authority is encouraged and communication and relationships are proactively managed. In the airline industry, air crew are now checked on their ability to apply CRM principles, just as they are in the ability to manage an aircraft.

As an industry, we need to finally recognise the importance of non-technical factors on project success and effectively manage them to reduce project failure and improve outcomes.

The field of forces

In any endeavour there are dynamics that impact outcomes; Kurt Lewin referred to these factors as a ‘field of forces’. A crucial aspect is how the dynamics impact and interact with each other and how this ‘chain reaction’ impacts performance.

In the project context, we believe there are three dominant groups of ‘forces’ that interact with the project environment and influence project deliverables and outcomes: technical, sociological and psychological forces. 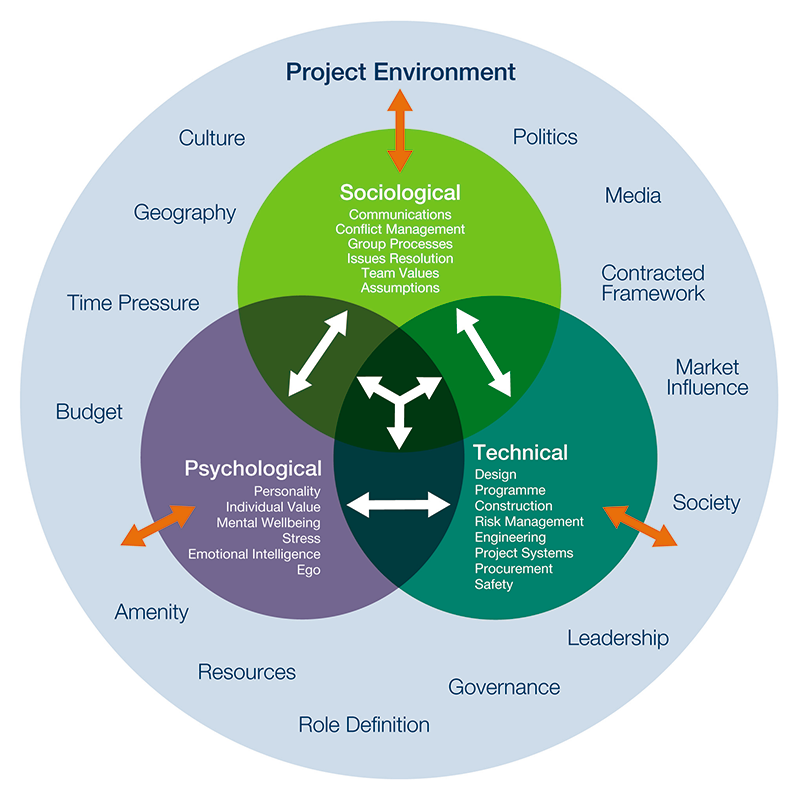 Just as risks in technical areas of a project lie dormant and are planned for, sociological and psychological (or relationship) risks also have the potential to impact project success—often with devastating results—and should be planned for.  Understanding these dimensions, how they interact in the project environment context and adopting a planned approach to mitigate them, will dramatically reduce project risk. Despite the evidence, relationship risks are rarely managed…

Why are relationships not managed as risks?

To overcome these common myths, we recommend adopting a structured approach to manage relationship risks and create high performing teams. Your plan should be grounded in project reality, with a scope, schedule, budget, defined objectives, risks and key performance indicators (KPIs). We suggest a simple but robust four point plan:

Communication, effective relationships and team work have a major impact on project success and they can be quantified, qualified, monitored and controlled, just like any other risk. The medical and shipping industries are adopting similar approaches and the construction sector needs to follow suit—particularly on complex projects—to create high performance teams and improve project success.

Graham Scott
Graham Scott is a senior consultant with Thinc, a leading, independent management consultancy, specialising in projects. Armed with a Masters in Organisational Psychology, he has over 25 years experience as a team coach, developing high performance teams in project environments. Graham has worked on both public and private sector projects and is also a lecturer with the Queensland University of Technology.
Read more

One thought on “Seeking the high performance project team”