Benefits realisation was once the sole domain of program management. However, benefits realisation is now becoming a central plank to the evaluation of project success along with the delivery of planned outcomes: on time and on budget.

That said, where benefits realisation is undertaken it is normally a before and after exercise. At the start, a statement of expected benefits is normally included in the business case or similar used to gain approval to undertake the project. Some time after the project has completed its deliverables a check is done to determine whether the expected benefits have been realised. Not surprisingly, the benefits that can actually be realised are often less than the expect benefits proposed in the business case.

While there is little that can be done about the former—sometimes there is not a lot a sponsor won’t do to get their pet project approved—appropriate project controls will assist in addressing the remainder. If those project controls also take into account the potential impact on the realisable benefits then the chance of realising a greater proportion of the expected benefits would be the result.

Rather than assessing benefits at the start and end of the project, as is common practice, the potential impact on realisable benefits should be considered along with costs, schedule and scope considerations whenever:

For example, when ranking the risk consequence the following table could be used. 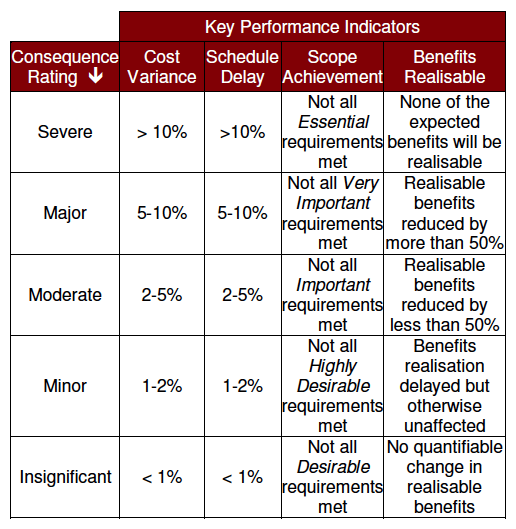 Similar tables could be used when rating issue and change impact.

By including the consideration of potential impact on realisable benefits to all project controls one can see that the focus on benefits will not be lost and that there will be a greater likelihood that the realisation of benefits will be maximised despite other factors affecting a project.

Guy Wilmington
Guy Wilmington is a leading portfolio, program and project manager dedicated not only to meeting his clients' needs through P3 Management Services, but also to building the profession by sharing his insights on various topics. He has twice been awarded the title of ACT Project Director of the Year by the Australian Institute of Project Management (AIPM).
Read more
News
Whitepapers
Submit a whitepaper
Pages